For 2022, we are considering meeting again in person.  Here are the topics:

For 2021, Great Decisions was in hiatus until we could meet again in person by which time the political landscape will be completely changed.   Here are the 2021 topics.  There is a lot of material free online from the Foreign Policy Association (fpa.org) if you want to keep up with the topics below. 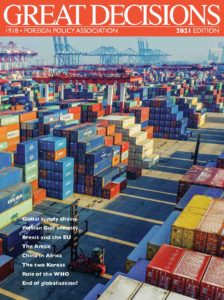 2021 Topics with blurbs below:

The shutdown of global supply chains due to the Covid-19 pandemic brought to the fore an issue with the high level of global economic interdependence: what happens when one country is the main source for an item, say face masks, and then can no longer supply the item? Countries suddenly unable to meet the demand for certain supplies are faced with growing calls for economic nationalism. What are some of the lasting effects that the pandemic could have on global supply chains and trade? How would this affect national security?

The Persian Gulf remains tense as the rivalry between the regional powers of Saudi Arabia and Iran continues. Tensions escalated in early 2020 as the United States began to intervene in the Gulf, launching an airstrike that killed two Iranian military commanders. What are the historical influences that have led to these tensions? What role, if any, should the United States play? Is using military force a viable foreign policy option for 2021 and beyond?

Brexit and the European Union: by Harris LaTeef

With the “Brexit transition period” coming to an end this year, the United Kingdom will formally leave the European Union at the start of 2021. With negotiations between the two entities continuing to stall, what does the future of Europe and the UK look like? Will the UK survive a possible Scottish vote to leave? Who will step up and take command of Europe now that Angela Merkle is out of the spotlight?

Struggles over the melting Arctic: by Stephanie Pezard

U.S. President Donald Trump left many scratching their heads when it was rumored that he was looking to purchase the large island nation of Greenland from Denmark. While any potential deal seems highly unlikely, the event shows the changing opinion within the U.S. government toward engagement with the Arctic region. Because of climate change, large sheets of arctic ice are melting, exposing vast stores of natural gas and oil. With Russia and China already miles ahead with their Arctic strategies, can the U.S. catch up?

The Covid-19 crisis has put a massive strain on what was growing a positive economic and political relationship between China and the continent of Africa. As Chinese President Xi Jinping’s centerpiece “Belt and Road initiative” continues to expand Chinese power, the response to the spread of Covid-19, as well as the African government’s growing debt to China, has seen pushback. What are some of the growing economic and political issues between China and Africa?

The Korean Peninsula: by Scott Snyder

The Korean Peninsula is facing a defining era. Attempts by South Korean President Moon Jae-in and U.S. President Donald Trump to repair the rift between North and South have lost any momentum as Pyongyang continues to test long-range missiles for its nuclear weapons program. As the rift between the U.S. and China grows further, South Korea may end up in the middle of the two superpowers. What does the future hold for the U.S. relationship with the ROK?

Roles of international organizations in a global pandemic: by Mara Pillinger

The Covid-19 pandemic has thrust the World Health Organization (WHO) into the limelight, for better and for worse. While some of the Trump administration’s criticism of the organization is unfair, the response to the early stages of the pandemic left many experts wanting more from the WHO. What is the WHO’s role in responding to international pandemics? What can be done to improve the WHO’s response to future global health crises?

The end of globalization?: By Anne O. Krueger

Great Decisions completed the 8 discussion topics for 2019.  Thanks to the organizing skills of Terry Nirider, we continued to meet monthly—we just couldn’t solve ALL the issues in 8 weeks.  Special thanks to our hostess at The Overture, who graciously made space for us each week.  Stop by and visit to thank them.

Great Decisions – gives you a voice in world affairs.  Our Fort Bend 2020 series started February 4—See topics below.   Then COVID struck.  We still have some extra copies of the discussion book for anyone interested in reviewing.

The 2020 Briefing Book or DVD is available from Foreign Policy Assoc. Bookstore

or to buy at Brazos Bookstore in Houston http://www.brazosbookstore.com/

Local Great Decisions groups meet to share ideas and opinions.  All program participants are invited to register their views on the Great Decisions opinion ballot, which is presented to U.S. leaders and major media.  Ballots are still available at the 2019 links below. 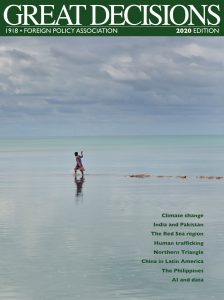 Climate Change and the Global Order by Ronald Bee

India and Pakistan by Barbara Crossette

India’s Prime Minister Narendra Modi rode a wave of Hindu nationalism to a historic reelection in 2019. His first order of business was to revoke the special status granted to the Kashmir region, inflaming the rivalry between India and Pakistan. How will the Kashmir situation affect the region, both economically and politically?

The Red Sea has remained vital for global trade since the time of ancient Egypt. Once home to the spice trade, the Red Sea now sees millions of barrels of oil a day transported across its waters. With major nations like China, France, Italy, and the U.S. building large ports and bases in the region, what does the future of the region look like? How important is Red Sea security for global security? Can the region be a place of global cooperation?

Almost every nation has enacted laws criminalizing human trafficking, and international organizations, governments, and NGOs sponsor a large variety of projects to curb trafficking and slavery. Billions of dollars have been allocated to these efforts. What is the international community doing to combat slavery and trafficking? What are the experiences like for those being trafficked?

U.S. Relations with the Northern Triangle by Michael Shifter and Bruno Binetti

Combatting illegal immigration has become a priority of the Trump administration. The Northern Triangle of Central America, made up of Honduras, El Salvador, and Guatemala, is a special target of the administration, which hold the nations responsible for the large flow of migrants from Latin America to the U.S. With funds from the U.S. cut, how can the Northern Triangle countries curtail migration?

As the Trump administration continues to withdraw from the world stage, China is looking to fill the void. How does Latin America fit into China’s “One Belt, One Road” plan? How will the relationship with China affect the region? Should the U.S. be concerned about China’s growing “sphere of influence?”

The Philippines and the U.S. by Julio Amador and Deryk Matthew N. Baladjay

The Philippines has had a special relationship with the United States since the islands were ceded by Spain to the United States after the Spanish-American War at the end of the 19th century.  However, since the election of Rodrigo Duterte, the country has pivoted more toward China, and away from the U.S. Duterte has also launched a large-scale war on drugs that many criticize for its brutality. What does the future hold for U.S, relations with the Philippines?

Policymakers in many countries are developing plans and funding research in artificial intelligence (AI). Global growth is slowing, and not surprisingly, many policymakers hope that AI will provide a magic solution. The EU, Brazil, and other Western countries have adopted regulations that grant users greater control over their data and require that firms using AI be transparent about how they use it. Will the U.S. follow suit?

Many thanks to Enid Tovy who organized this interesting group for 30+ years, now facilitated by Bill Johnson and Terri Nirider.  No expertise, only interest (and preparation), is required.  For more information contact:  Bill Johnson. 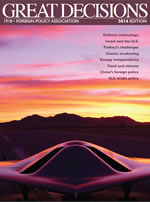